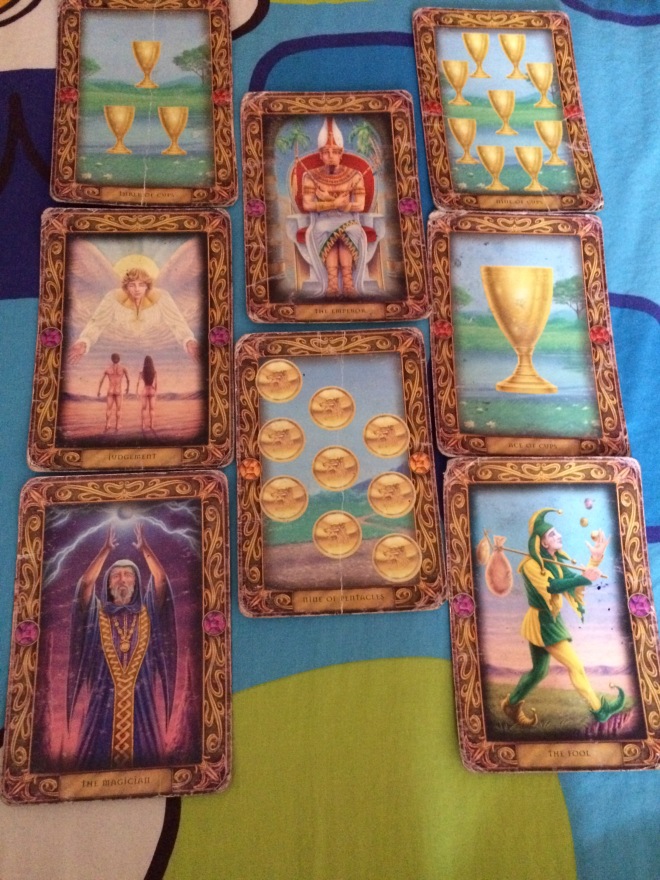 Main theme – The emperor, what is occurring for both twins – Nine of pentacles, Masculine – Three of cups, Judgement, The magician, Feminine -Nine of cups, Ace of cups, The fool.

Once again, this reading is not limited to those identifying with the term ‘twin flame’ alone & should also resonate with high frequency soul mates. The terms masculine & feminine are also embodiments of energetic templates & are not necessarily restricted to gender.

The main theme this week, arriving as the emperor is proof that sacred lovers this week once again, have their focus towards establishing order, bridging boarders, and barriers, and going the full length to create the life that they are now certain that they deserve!

This includes obliterating any past obstacles that stood in their path, whether these obstacles were external, or of the self. It does not matter, because this week, sacred lovers will stop at nothing to see the acquisition of their goals. This is the tying up of loose ends, the strategy & the implementation that is required to take mere ideas & plans, & turn them into profit & success.

Taking charge & taking control of their own finances as depicted by the 9 of pentacles. This is all about going it their own way, taking matters into their own hands & not waiting on anyone, or anything, to offer them a hand out. They are done with co-dependent ways of thinking this week, as they recognise that the only way to sustainability, is self sustainability. No longer waiting for assistance, that rarely ever comes, and only keeps them in a state of procrastination.

The 9 of pentacles is the focus on the manifestation of their goals, talents & abilities. They are working feverishly this week in order to make everything come together full circle. Something within them – likely a realisation (see general weekly reading), and they are realising this week, that there is no longer any time to waste. Perhaps, they are combing their efforts here in order to take their careers to the next level. This may not necessarily be done physically, but could be achieved energetically, through the merging of both of their worlds.

The emperor card may also represent both lovers healing with & dealing with father issues, or karma from the masculine template.

The masculine energy is initially provided by the father figure in a child’s life, if a child is deprived of this, (even through emotional distance), it takes manifestation in different ways.

The feminine energy will likely suffer from a lack of organisational skills, or ability to structure & depend on the self, whilst the masculine energy may over compensate his masculinity & fail to tap into his inner consciousness, or even refuse to confront internal issues, that he may perceive as too feminine for him to allow himself to address. This is being rectified this week.

Masculine – with the three of cups present, the masculine is focused on unity consciousness. This could be him looking into the future & perceiving a life together for him & the feminine, that involves a child, or children. This third energy, however may also speak of the two creating something together that is successful, & that benefits the two of them equally.

The judgement card is the masculine’s realisation of the intensity & immensity of the spiritual union that is presented to him here at this time – as a result of uniting with the feminine. This is mass karmic work occurring, he is very powerful this week & he knows that it has everything to do with this connection. It is almost as if this relationship has given him spiritual strength.

He is engaging in the exploration of his own soul, this is comfortability in tapping into his feminine energy, and acknowledging that he too is a great creator of that which he desires. His manifestation abilities are speeding up, as depicted by the magician card. He is saying this week, ‘Look what I can do’.

Spirit is like, ‘look at the gifts that I have given to the two of you, to go out there & use, to heal, inspire & empower others’.

It is imperative this week, to use these abilities & to use this connection to give birth to a third energy, a creative life force. This may be an ‘AHA!’ Moment about the work that the two of you can do together.  The three of cups signifies the ultimate goal of divine love, (creation & manifestation).

The masculine has reached a pinnacle, the end of a cycle for him in his life & it is calling for a rebirth/self re-evaluation.

Maybe there were 3 people involved in the union & he has realised that he has to drop, or let down gently the other party, because there’s only room for two in a spiritual/divine Union.

It is also possible that it is his epiphany to create children with the feminine that gives him extra added motivation to create a successful template, to ensure that all their needs will be met, and taken care of.

Judgement is the realisation that he can change the self & break the cycle of bad habits, because he now has self awareness.

Both energies are really coming together this week & influencing one another in a very impactful way! They are building an empire, cultivating establishments & working on the realisation of their goals & dreams. Perhaps the masculine is even experiencing dreams in his sleeping state of their future together..

Feminine – with the 9 of cups introducing Itself on the side of the feminine, her dreams & wishes are actually coming true this week! I am so excited for you feminine!

She may be receiving good news about her business/career, and the direction that she is to go in now. Somebody arrives to tell her some good news this week & the news is in relation to her being one step closer to her dreams. Two 9’s in this reading, definitely signify the completion of a cycle & the beginning of a new one for her – along with the fool card.

She’s using painful past lessons to create something beautiful this week & it is offering her a sense of empowerment.

The masculine also has something to do with the way that she is feeling & the luck that she is experiencing, as he has offered her something. Maybe it was a dose of masculine energy, maybe it was his belief that she could really make her dreams a reality & that she is really powerful – based on what she has shown him!

Abundance is the message & the theme for her this week, she has more than enough, even when she cannot see it transpiring, she IS divinely taken care of.

The ace of cups is this new beginning in love, (once again, we talk of new beginnings for her). This is karmic resolve on a large scale from past relationships, & this signifies new perceptions about love & the masculine. This is belief in a better tomorrow, less scepticism, less pessimissm & ironically, the abandonment of abandonment consciousness.

She is learning how to deal with the struggle & rubble of life better.

The fool card sees her walking away from the past & focusing on the future. She is taking helpful past lessons & experiences with her & leaving behind that which is harmful, or traumatic. Learning from past mistakes, she carefully begins the weaving of a new future this week. I sense an enthusiasm about her potential future advancements, and what is to come.

When you remove your focus from the past, you witness how life is a journey of constant initiations & profound rebirthing.

Nothing is a mistake. Nothing has gone to waste.

You learn to take all of the useful things that you have learnt from the past, & you proceed to make the scary jump into the future.

Whatever it may bring –
Happy healing my sacred beings ~
To book a personalised/private reading with me, email me via cindyanneh-bu@hotmail.co.uk

From a very early age, it was clear to see that my path was one paved with difference. Inspiration, intuition, and imagination gripped me long before I could find my feet. I walk the life path of 7, so I am irreversibly bound to the realm of mysticism, spiritualism, and esotericism. I do not belong to this world, for I am a 'tween', always in between worlds. I am the commander of serpents, belonging to the glorious, and forbidden 13th zodiac of ophiuchus. Hidden in secrecy, to one day return as the divine feminine awakens. Love, is my speciality, and has governed my existence. I now use a combination of intuition, natural healing ability, astrology, psychology, sociology, and numerology to bring clarity, healing, and understanding to all. With the energy of ophiuchus running through me, I could never turn away from the path of healing, nor teaching. Not only does ophiuchus represent healing, but also the crevices of the dark shadows that we must crawl through to find our path to healing, in other words, the shamanic process of death, and re-birth, which has pretty much been the summation of my existence thus far. Long gone are my days of depression, I have re-claimed my divinity, and I desire nothing more than to help you to also claim yours. Not only the seeker, I am also the lover. Part of the many trials that I have endured upon this empathic journey, are that of heart break, and abandonment consciousness. For this reason, I have become an advocate for healthy loving relationships, and the harmony between the two sexes. This has taken me on a deep quest, to uncover ancient old secrets, and deeply entrenched beliefs, about man, about woman, and what this reads about where we are to. My eternal life drive and motto revolves around this simple theory, 'Where there is an outcome, there has existed a cause'. My particular areas of interest and expertise lie with sociology, psychology, spiritualism, philosophy, and literary, and creative writing. As I have a deeply intense desire to both serve, and aid humanity, I have naturally been drawn toward topics that have provided me with a more in depth account of societal behaviour, and as it stands, human kind. My roots are as deeply rooted as they can be, stemming from Ghanaian parents, who were raised, and both skilled in the art, and knowledge of superstition, and divination wisdom, it is no surprise that the blood flowing through my veins compels me to do such work, so relentlessly. Unlike other bloggers, this work featured here is not a mere hobby, it is more than just my livelihood, it is the calling of which i cannot ignore. Another prominent focus of mine, is mental illness. Not comfortable, nor fully sold with the western idealisms of the implications of such, i seek research, personal experience, and observation to prove, that many mental illnesses hold spiritual connotation, particularly as the mind is an avid translator of spiritual energies. Follow me on this journey as i discover myself, retrace my roots, fall deeply in love with my heritage, and finally accept my awkward, unorthodox societal position. To book one of my services, and allow me to guide you back to the soul, email me via cindyanneh-bu@hotmail.co.uk I offer dream interpretation, tarot reading, therapy, numerology readings, and see through the eyes of the lover.. To contact me across all of my platforms, follow me on instagram to keep up with my latest quotes, and mystically inclined photography @spiritualpoetess_ To keep up with my snappy, sassy, and spiritually laced motivational tweets, find me on twitter @spiritualpoet_ Facebook like page https://www.facebook.com/Twinflameandshamanchronicles View all posts by spiritualpoet